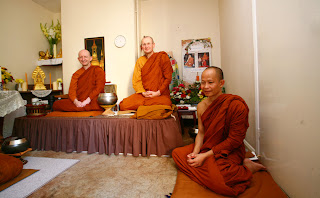 Good progress has been made on the way towards establishing the Buddha Metta charity here in the UK.  We have a group of Trustees and have held several meetings already to discuss the work that needs to be done towards realising the goal of having a charitable trust established as soon as possible.  This is the key first stage to there being permanent Buddha Metta practice centres that are owned and belong to the people.

We have had incredible support from lay and ordained people alike including a very auspicious meeting of Venerable Ajahns here in Cambridge.  Ajahn Amaro, the Abbot of Amaravati Buddhist Monastery along with Ajahn Jayanto and a young Hungarian Bhikkhu came, as did Ajahn Karuniko and Ajahn Gavasako from Chithurst Buddshist Monastery.  The two groups had not known that the other was coming.  It just happened to work out that on that particular Tuesday it was possible for them to come together.  We would love to learn (remember) the young Hungarian Bhikkhu's name. 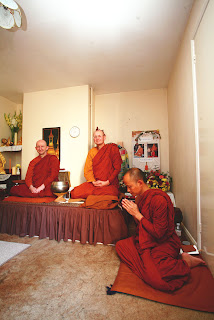 Their intentions were to show support for Luangpoh Sudhiro's work and to get to know each other better.  A good amount of lay people also gathered and Ajahn Amaro gave a speech that meant a lot to all of us here.  Ajahn spoke of how special and important it is that there will be a Forest Sangha presence here.  He said that there are only a small amount of teachers in this world that are able to make the Dhamma accessible to people in a simple way, and even less that are able to do it in the English language.  We are fortunate to have a person in robes who is those things and has the energy and drive to share it with as many people as possible all around the world.  He also said that it is hard work to make a temple work when there are all kinds of people and money involved, but that with the right intentions it could only be a positive learning experience.  He mentioned the Mangla Sutta where the Buddha says that we should not mix with fools and instead to associate with the wise.  He shared with us experience of setting up Abhayagiri Buddhist Monastery in California and offered contacts for us to be in touch with who can help us set up our charity in a way that will be long lasting, without problems, and one that will benefit as many people as possible.

From all of us here at Buddha Metta, we would like to acknowledge our heart felt appreciation for the gesture of support from all these amazing followers of the Buddha's way, the Sangha.  That is for the ordained Sangha and lay Sangha who came from the Hemel Hempstead and West Sussex/Hampshire, and the lay Sangha from Cambridge who actively show their support every single day.  Sadhu..Sadhu..Sadhu..