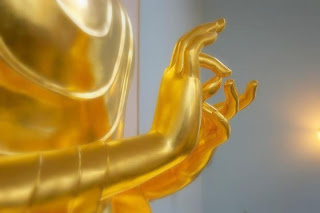 On Friday 3rd August Luang Poh Sudhiro travelled from Buddha Metta Cambridge to mid -Wales accompanied by three members of the lay community; Kamonchanok, Pong Pong and Ken. He had been invited by the Samatha Trust to take part in celebrations at Greenstreete, their national retreat centre. The celebrations were held to mark three important anniversaries in the life of the Trust. It was fifty years since Nai Boonman began teaching Samatha meditation in this country, twenty five years since

the purchase of Greenstreete and Nai Boonmans’ eightieth birthday. The celebrations were attended by representatives of the Sangha from various parts of the country and many lay people who had a connection with the tradition. 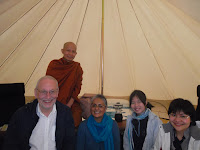 On Friday night we stayed at Hill Cottage, the beautiful home and project of Zarine Katrak and Jeremy Bruce. We were joined in the evening by several dear friends from the area and beyond and took the opportunity to chant and meditate together. Early Saturday morning we joined together again in the same way before setting off for Greenstreete. The proceedings began with the chanting of paritta by the monks and nun who were then offered dana. The lay people then enjoyed a wonderful lunch and a chance to talk to old and new friends. In the afternoon there were Dhamma talks from members of the Sangha and talks from several senior members of the Trust. We then had to return to Cambridge although the celebrations continued throughout the weekend but we felt fortunate to have taken part in such an auspicious occasion along with such good company. 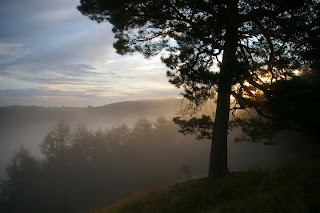 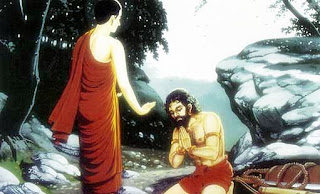 Angulimala
Last Sunday evening 16th September, Luangpoh Sudhiro with Ken and Dick drove down to Spring Hill prison near Aylesbury to join in the 20th anniversary of the opening of The Buddha Grove in the prison grounds. 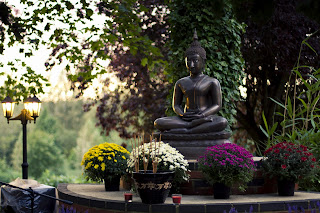 About 400 people, including many monks, attended this anniversary which was organised by Angulimala, the Buddhist Prison Chaplaincy with the help of many Thai friends and the prison. 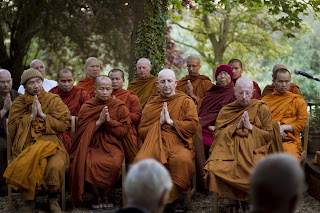 The Buddha Grove is a landscaped garden with a large Buddha Rupa at the centre, all constructed by prison inmates of various faiths during 1991, a place of tranquillity and peace much appreciated by inmates and staff of the prison. 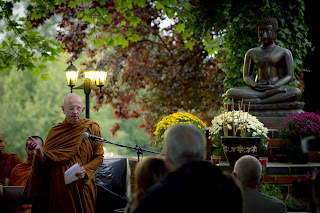 Laungpoh Khemmadhammo, the Spiritual Director of Angulimala, presented the evening and related the wonderful history of how the Grove came to be and also the story of Angulimala.  The evening included speeches from Angulimala members including Lord Averbury, prison staff and inmates and a meal in the visitors canteen, this supper being organised and supplied by Thai supporters, an astounding feat.

After dark this was followed by a candle lit circumabulation of everyone round the Buddha Rupa, a magical moment with this large crown of forms in the candle light slowly making its way three times round the Buddha.
So, a truly amazing event in a place where prisoners prepare to leave the confines of their sentences, Spring Hill being a Category D Open Prison,  may it help them on their way.

Posted by Buddha Mettā UK at 22:31 No comments:

As England begins to descend into Autumn, Luang Poh Sudhiro has been active sharing his understanding of the dhamma and some of his personal experiences with others. 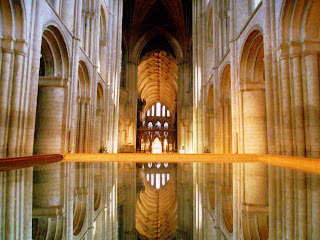 On Friday, September 7th, Luang Poh Sudhiro shared the dhamma with an audience of over twenty at the Friend's Meeting House in Cambridge. He spoke of how he got the most out of his breathe, using it to overcome the excruciating and chronic pain from his liver cancer - since cured, how, as a soldier, he used his breathe in the Cambodian jungles to save the lives of his fellow compatriots along with himself, and how his mastery of the breathe helped save his life again when he was bitten by a venomous snake, slowing his heart rate down and calming his nerves so that the poison could not spread rapidly through his body. But Luang Poh, like all of us, will eventually stop breathing.

What will we do with the few breaths we have left? 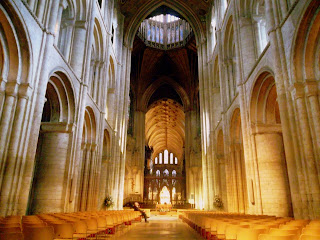 The following week, on Wednesday, he visited a meditation group in Ely at the conference centre in the area of Cathedral, to offer his understanding and experiences to others and listen to theirs. They sat together silently and breathed and then chatted about a variety of topics, including the myopic attitude which many Westerners have towards practice.  Luang Poh situated meditation practice carefully within a broader and more wholesome context of spiritual development and life which includes the practice of generosity, living a life of moral integrity, and, finally, of developing a deeper understanding of oneself. Without these other practices and aspects present, meditation's transformative potential is stifled and reduced to a mere coping mechanism for the vicissitudes of life, all-be-it a far healthier one than a beer or soap operas.

The dhamma is to be lived. 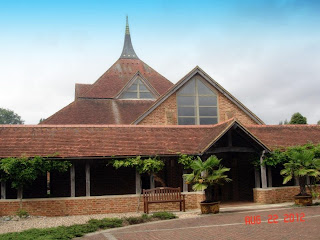 The morning was bright and blue and warm, an auspicious beginning to our journey West to the Deathless Realm, Amaravati. Luang Poh Sudhiro, Ajahn Surapon, Than B, and Poh Ken left early in the morning, leaving plenty of time for monking around - which is code for getting lost, side-tracked, or otherwise diverted, one of the many special abilities which this band of contemplatives has become notorious, or renowned, for. 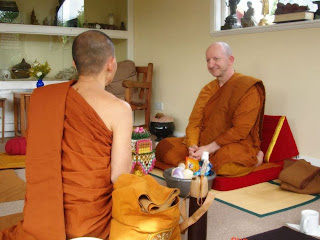 Life is unexpected, and there is hardly a clearer expression of this than the life of a Bhikku.  But in England, there is a second runner up: the weather. By the time the ocher clad gang arrived at the Deathless Realm, the blue sky had been engulfed with a thick haze of fog accompanied by fierce winds. Apparently even the Deathless is not exempt from the climactic vicissitudes of this island. 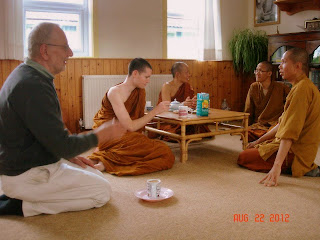 After introductions and a solid stint of sitting around, another specialty of Bhikkus, the monks went and paid their respects to Ajahn Amaro and, by extension, the entirety of the Sangha at Amaravati for keeping these precious teachings alive and well, lived in the careful manicuring of the lawns, the tidy arrangement of their robes, and their inner warmth.
The monks then joined for Dana and, following Dana in the afternoon, there was a meeting of the Sangha, including representatives from forty-five temples from throughout the UK with monks from India, Sri Lanka, Burma, America, Thailand, and England in attendance. 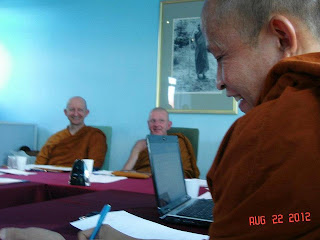 At the meeting, headed by Ajahn Khemadhammo, the Bhikkus discussed: the visa problems which many temples are struggling with, costing them not only excessive amounts of money through the expensive and laborious application process but also threatening their very existence, some of which are at risk of being abandoned because of a shortage of monks; the possibility of establishing a non-sectarian Buddhist center in London; what steps should be taken by the Theravadan community and monastic Sangha to protest the disrespectful use of Buddha images; and what Buddhists should do when taking an oath in the court of law (should they, as is a current legal option in the English court, break cups, a practice attributed to Chinese gangsters, not Buddhists (!), or say a Tibetan prayer, or place their hand over the Dhammapadda?) In addition to these discussions, new Sangha board members were elected. 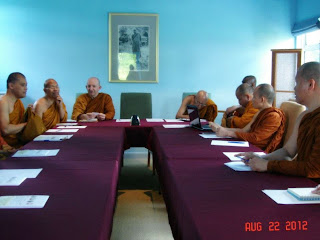 Fittingly, by the time the meeting ended the mist had burnt away, the winds had been soothed, I suspect by our serene gathering, and a brief and beautiful English summer day graced the grounds of Amaravati. It was perfect weather for pictures, a choice hobby amongst Bhikkus who, so acutely aware of the intransient nature of life, attempt to capture every riveting moment of Bhikku-life on film and preserve it on their FaceBooks. In the warm oranges of the fading sun, the Bhikkus posed for group photos and then exchanged friendly bows and farewells. 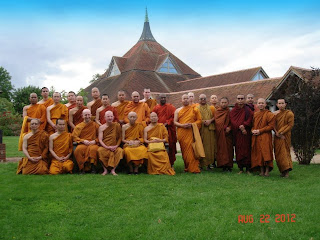 Poh Ken, who had been patiently sitting outside basking in the weather and enjoying the company of the friendly Amaravati Bhikkus, then rejoined the Bhikkus who drove joyfully out into the blue and through the freshly threshed wheat fields studded with statuesque hay-stacks. 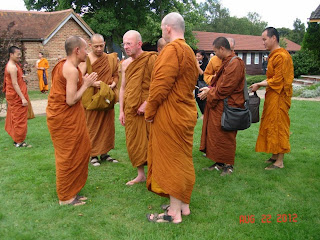 Another beautiful and ephemeral day.
In gratitude to the innumerable acts of kindness and generosity that made the journey, meeting, and the Deathless possible,
The Wat Buddha Metta Sangha
Posted by Buddha Mettā UK at 13:35 No comments: