For those unfamiliar with the custom and practice of Theravada Buddhism, the Rains retreat marks the time during the year in which monks stop their homeless wandering and stay at a single residence for three lunar months.

The tradition of the rains, or rainy-season, retreat predates the Buddha and was honored by many of the various ascetics of his time.  The reason is not because of some magical belief about the months, but eminently practical. During these three months, the roads, moreso before the advent of concrete motorways, would turn to mud and become near impassable, the fields, flooded with water, would be ripe for planting rice and other staple crops and, more importantly for monks and other ascetics, would be sensitive to being damaged or destroyed by errant wanderers in a time when

paths were poorly marked, if at all; and, in addition to that, all sorts of creepy crawlies would be slithering about - snakes, mosquitoes, and all the other wonderful things that buzz, hiss, and bite. This, of course, goes without mentioning the discomfort that comes with living outside and unsheltered for three rainy, rainy months. It was neither  a pleasant nor safe time to be wandering, so during this time monks would seek shelter at a monastery and determine to stay there until the monsoons passed, the crops were harvested, and all the creepy crawlies subsided with the arrival of drier times. 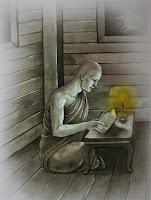 During this time, monks, committing to a single place, would take this opportunity to intensify their efforts in their meditation, undergoing various austerities and practices as a way to better understand not only suffering and its causes, but also, and most importantly, the end of suffering and the causes of it's end, to find, in other words, a more genuine and stable inner peace and happiness not based on the vicissitudes of the body and mind but on qualities of the heart. Some of these include not lying down for three months to rest, eating only every other day, or sitting still in meditation from dusk to dawn. Some focus on a specific text or contemplate a particular theme.   Sadhu!


For the lay people, it is also seen as an opportunity to intensify their own practice and engagement with their spiritual lives. This might mean making larger donations, of time, money, or both, spending every full and new moon day at the temple or at home practicing chanting and meditation, or going without meat, sex, food after noon, or other helpful don'ts for the three month period.  They can also do just as the monks do - sleepless and starving, and why not? 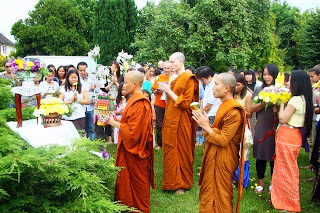 It can also be seen as an opportunity for positive affirmations and intentions, not just grizzly No's: to be more kind and forgiving or to be more generous in both wallet and heart or to listen more attentively and receptively.

Now, you might rightly wonder why we honor this custom in England, during it's most beautiful and sunny months when the rain briefly subsides and the sun graces this green land, time which would be best spent wandering and not holed up in some temple somewhere. It's a good question. Some monks continue this tradition outside South and Southeast Asia as a way of paying their respects and expressing their gratitude to our founding teacher, the Buddha, and the global Sangha, especially those in countries beset by the rains. Another reason is that this time has been deeply engrained within the psyche's and calendar's of many from Buddhist countries like Sri Lanka and Thailand as a time of piety and practice. It's just what you do in August and the other months.

Whatever the reason is, this has been an auspicious and fruitful time for the community, gathering together wayward strands and sectors to create a more united and supportive multinational Sangha in Cambridge. It began with a day of celebrations on the 5th of August and we at Buddha Metta hope to continue to keep this spirit of community, harmony, and practice alive and well.

In gratitude for the efforts of so many who have formed this lovely Sangha. 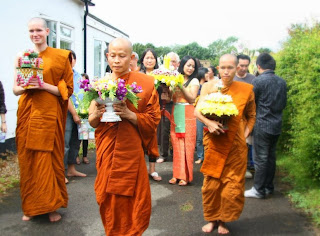 Posted by Buddha Mettā UK at 18:51 No comments:

All meditators welcome including complete beginners.
Luang Poh Sudhiro is a senior monk in the Thai Forest Tradition.  He spent many years practising in seclusion, but for the last ten years he has been active internationally, teaching especially in the UK and New Zealand The sessions will run from 9.30am–5.00pm each day, and people can come to either or both days. The days will consist of sitting and walking meditation and meditation instruction especially for beginners, dhamma talks and time for questions and answers and will be largely in silence. 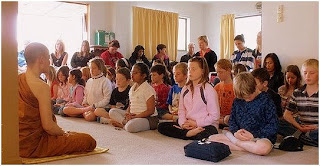 ***  Please bring food to share for lunch and a cushion or stool. ***
Chairs are available for those who need them.
The vihara is at 135 High Street, Harston, Cambridge CB22 7QD opposite the Porsche Centre. There is parking on site, or you can take bus 26.
No advance booking is necessary and there is no charge but donations towards the vihara are welcome. If you have any enquiries
phone Dick Allen on 01353 659082
or email : bodhi.d4@gmail.com
http://buddhamettauk.blogspot.co.uk/ 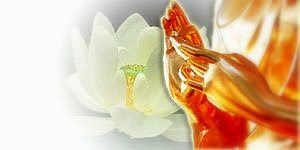 Posted by Buddha Mettā UK at 15:31 No comments:

The Arrival of Two New Monks


Monks in residence Vassa 2012
Last month, at the end of July, two new monks arrived from Thailand: Luang Poh Sudhiro and Ajahn Surapon. The community here has warmly and joyfully welcomed them to their new home for the next few months. 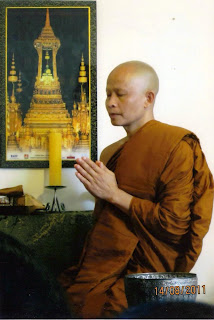 Luang Poh, which means father in Thai, Sudhiro should be a familiar face to Cambridgites, but for those unfamiliar or forgetful, he has spent 28 years as a monk in the Thai Forest Tradition. He has battled malaria, cancer, and venomous snake bites, to mention only a few of the many obstacles he has had to face, during his illustrious and near-lethal life as a monk. What has sustained and continues to sustain him is his devotion to the Dhamma, the teachings that point a way to a deep and unshakeable inner peace. His English is excellent, and his heart is as bright and prismatic as a gem. 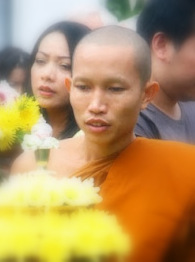 Arriving a few days after Luang Poh was Ajahn Surapon. He ordained as a young boy at the age of thirteen and has been since for a total of twenty years. He grew up in Northeast Thailand and moved to Ayutthaya, an ancient capital of the Thai Kingdom, to continue his studies as a young man. After completing his studies, he moved to Bangkok and then later into a serene forest temple in a National Park where he teaches Sociology, focusing especially on Southeast Asian culture. Besides also speaking good English, he glows with joy. 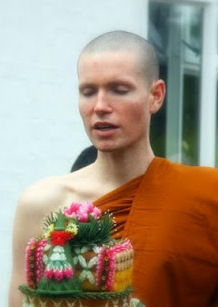 These two lovely monks, along with Than Khemacitto, will spend the rains-retreat here in Harston. Looks like Cambridge will have a nice little Sangha for the next few months.

Posted by Buddha Mettā UK at 16:14 No comments: